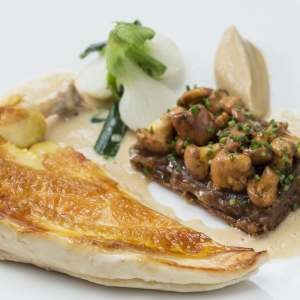 restaurant at Centurion Club, St Albans Two of the UK's most esteemed restaurateurs, Chris and Jeff Galvin, have just launched their first venture in the Home Counties at the impressive Centurion Club. Just opened, Galvin at Centurion Club will showcase the classic cuisine and timeless dining experience for which the brothers are renowned.

Starting out in Baker Street with their first restaurant, Bistrot de Luxe, the Galvin brothers have been producing some of the UK's finest French cooking for the past ten years, gaining a Michelin-star at Galvin at Windows and Galvin La Chapelle. Casual yet perfect dining is catered for at Galvin HOP, a Pub de Luxe in Spitalfields, while Galvin Demoiselle in Harrods gives shoppers a bijou break in classic French style. Two Galvin restaurants were opened in Edinburgh, The Pompadour and Brasserie de Luxe. The most recent addition to their culinary portfolio is Galvin at The Athenaeum in Piccadilly.

The 84 cover Galvin at Centurion restaurant, which is open to the public, will stay true to the signature Galvin experience, offering a warm, welcoming and informal environment in opulent surroundings. Dining will be available in the main restaurant, bar or on the terrace, in addition to three adjoining private dining rooms, which will seat 12-14 guests each.

The cooking is ingredient-led, with simplicity, passion and seasonality. Signature dishes include lasagne of Dorset crab with beurre Nantais and roast rump of Herdwick lamb, grilled Provencale vegetables & black olives together with well-balanced desserts such as Provence apricot & Valrhona chocolate soufflé. Lunch and dinner is available seven days a week and will also offer affordable two and three course set-menus.

Inspired to embark on this project by his love of golf, Jeff Galvin comments, "I was initially introduced to Centurion Club a few years ago through my passion for golf. The club itself has a relaxed, family friendly feel without compromising on detail or quality which echoes our own ethos at Galvin Restaurants. Very soon after meeting the owners I realised how ambitious their plan was; simply to create an exceptional, yet accessible and good value restaurant that would complement their already world-class golf facility. Over the last 2 years we have been planning Galvin at Centurion Club and are very excited by the result. We look forward to welcoming the public as well as Centurion Club members."

A Chance To Win

Win Afternoon Tea for two at Centurion Club, each month.